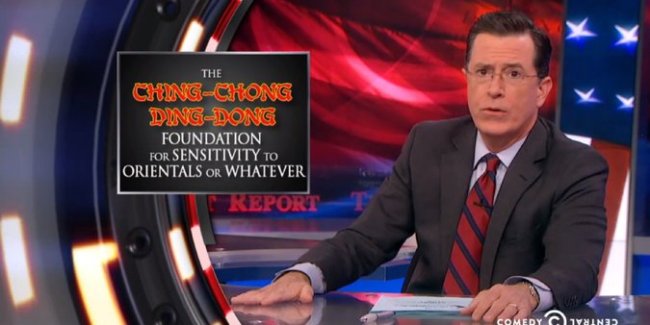 This isn’t about the philosophical argument over whether Stephen Colbert’s tweet (or that of whoever runs his Twitter account) or his show segment was racist or trivial. Nor is it about the drawbacks of disproportionate offence. I’ve done that here and here. This is about the politics of manufactured controversy.

Last November, controversy flared up regarding TV producer Elan Gale’s viral Twitter battle with a rude, pushy traveller named Diane. Did her rudeness to flight attendants deserve to be publicly shamed around the world? Was he being sexist by passing a note telling her to “eat a dick?”. Turned out it was a manufactured conversation dreamed up by Gale as both an entertaining and cautionary tale. To his credit, Gale stated:

“I wasn’t trying to paint myself as a hero. I said horrible things in those notes that I would never say to a human being. That nobody would ever say. In fact, in all of my live tweets, I try and portray my character as an anti-hero — as kind ojerk with good intentions.”

Problem was, if used unwisely, Twitter can, among other things, channel mob mentality where the individual, real or fake, can be sacrificed for public satisfaction and amusement for the whole world to see. Before being revealed as a fake, this event was celebrated by as ‘This Epic Note-Passing War On A Delayed Flight Won Thanksgiving.’ Seeing ‘Diane’ get her comeuppance perfectly channeled our feelings of frustration whenever we’ve seen someone be rude to service staff or be racist on public transport and said nothing. Even though fake, Gale channelled our desire for revenge through vicariously cheering on a collective sacrifice.

I was initially upset about the #cancelcolbert viral tweet because the outrage made no sense, at least until I read this post, which featured an interview with creator Suey Park, an Asian-American writer and activist, and fan of the Colbert Report. Park’s agenda for #cancelcolbert becomes pretty clear: “to argue that white liberals who routinely condemn what she called “worse racism” will often turn a blind eye to, or even defend, more tacit forms of prejudice, especially when they come from someone who shares their basic political beliefs”.

“Well-intentioned racial humor doesn’t actually do anything to end racism or the Redskins mascot,” Park told me. “That sort of racial humor just makes people who hide under the title of progressivism more comfortable.”

I can sympathise with her aim. Similarly, during the Roastbusters case, I perceived that social media and Twitter attention celebrated the views of men defending women against sexist views, rather than a more valuable debate based on the experiences of womens’ experience with sexual assault and the judicial system. The blogosphere had not shortage of excellent women-led coverage but the public preferred to hear from men. Perhaps this was a matter that men still tend to dominate at least the most popular blogs. Like this, perhaps #notyourasiansidekick expressed a desire that Asian Americans want to defend themselves and be listened to rather than have their anti-racism debates being led by well meaning non-Asian liberals who might not share their sense of satire.

The way #cancelcolbert was manufactured sullied this valuable point. It was akin to Colbert as the kidnapped damsel in distress to lure the real target: a posse of condescending liberals. Park manipulated and channeled the collective experiences of verbal, even physical racism, stereotypical assumptions (which I’ve experienced at primary and grammar schools) and limited/ negative portrayals of Asians in the media to make her point, albeit disingenuously. Denigrating one of the bravest American satirists, twisting context, and portraying his defenders as racist and condescending completely destroyed her point. The result made it about Colbert, so in fact didn’t achieved the meaningful debate she wanted.

Fake controversy can be revealing. In the Elan Gale case, it was an undercurrent of frustration and the cheering of others to take revenge and humiliation for all our experiences we’ve remained silent. For #cancelcolbert, it was an aim wrecked through manipulating peoples experiences to lure out a phantom enemy, who in fairness saw an injustice in the way a comedian they liked was being treated to prove a point. In the latter, the means do not justify the ends nor aid the point.